A review of Dan Falk’s The Science of Shakespeare: A New Look at the Playwright’s Universe

Think of London in 1600, a pivotal year in Shakespeare’s canon, as a mash up of Canada circa 1967 (Expo, Trudeau, a blasting economy, and lots of kids with hardly anything to worry about) and contemporary Palo Alto, the app startup incubator of the world. Throbbing with British bravado, the sinking of the Armada, religious freedom, explorations of the New World, 1600 was a time when princes, ruffians and pickpockets equally enjoyed bear baiting (an appallingly sadistic sport) and flowery poetry.

This was when the distinctions between religion, astronomy, astrology and magic were fluid; when “science” wasn’t science yet; when adventurous thinkers were pulling away from ancient ideas and increasingly relying on mathematics and observation.

In November 1572, when Shakespeare was eight, a supernova, a massive dying star shone in the sky for months, shaking up the idea of immutable heavenly spheres. It signaled the slow death of magical thinking and the birth of paradigm-shaking revelations: the distinction between electricity and magnetism; the law of inertia; the magnetic pull of Earth; the theory of lenses; Galileo’s telescopic discoveries (born the same year as WS); the laws of planetary motion; the law of hydrostatic pressure; and the law behind the swinging of a pendulum.

How curious then that scholars came so late to considering if and how this scientific exuberance might have found its way into Shakespeare’s plays. This is the subject of an excellent book, by Dan Falk. It’s a scholarly guide to some of the best thinking —and a refutation of some of the more loony ideas— about Shakespeare’s canon and the “science” of his times.

The science-bard link was first made by Peter Usher, an astronomer, in a paper he presented at a conference in Toronto in 1997, which he followed up with a book, Shakespeare and the Dawn of Modern Science, in 2010. He claimed that “Hamlet” was actually a gigantic face-off between the Ptolemaic and heliocentric/Copernican concepts of the Earth’s place in the universe, whether it be at the centre where the Ancients had put it, or farther out, a mere planet rotating around the sun.

“Perhaps the biggest riddle of the time was whether the universe was small, comfortable and human-centered—or whether, as a handful of bold thinkers had suggested, it was enormous, with mankind a mere speck and our planet, on a cosmic scale, little more than a dot,” writes Falk. “No wonder Hamlet sees ‘this goodly frame the earth’ as nothing more than a ‘congregation of vapours’, ‘a sterile promontory.’”

The scholarly community was prepared to buyin to this notion at least a little, but as for the more radical picture, that Hamlet was actually a secret allegorical code that Shakespeare had created with the idea of dodging the (non-existent) religious police,  well as one Harvard prof put it, Shakespeare doesn’t do allegories.

At the opposite end of the argument, it now seems absurd to suppose that Shakespeare, living within a few cramped dank city blocks of the world’s greatest pre-telescope astronomers, socializing as he did up and down and sideways across society as only celebrity entertainers could do, wouldn’t work in some scientific fervor into his plays. And this view seems to have won out, according to Falk.

The Science of Shakespeare is your time machine to a deeper appreciation of the plays and the history of science, especially regarding Copernicus’ De revolutionibus, the book that moved Earth away from the centre of the God-created galaxy. Fortunately, the book stays away from the aggressive fact-twisting that imbues the attempts by the lunatic fringe to prove Shakespeare misogynistic or anti-Semitic or a literary fraud or something else that suits the temper of our times. Falk’s book is definitely a cut above all that.

But back to “Hamlet”, Falk does draw lines between specific references in the play to contemporary people and events. “Yond same star that’s westward from the pole” in the opening scene probably referred to the supernova of WS’s childhood. Hamlet’s pals, Rosencrantz and Guildenstern, were names plucked from a list on a 1590 engraving of the Danish astronomer Tycho Brahe, the greatest of the pre-telescopic astronomers. (Tycho is thought to have been the model for Prospero in the “Tempest.”)

More telling is Hamlet describing himself as the king of infinite space. “Infinite” applied to “space” was new. It’s his fussing over his role in the psychic and cosmic abyss that has kept “Hamlet” at the forefront of Shakespeare’s plays. 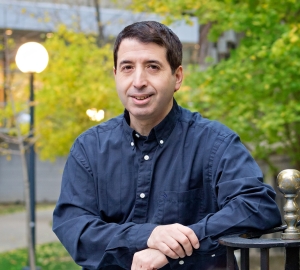 But just as “Hamlet” looks forward, “Macbeth” looks back to an older world of magic and witches. Falk describes them, these vectors of bad magic/science, as something of a national obsession. Witches could be male or female but they were usually described as old women, elderly, helpless, crippled, wrinkled, hairy-lipped, squinty-eyed, squeaky-voiced and with a scolding tongue. Their most intense persecution coincided with the scientific revolution, as people joined their need for vengeance with scraps of emerging science.

“Magnetism seems almost tailor-made for mystical interpretations…The very idea of magnetic forces ‘seemed to open the possibility of telepathy, magical healing and action at a distance.’ For example, if someone was injured by the use of a weapon, it made sense to apply the healing ointment not only to the wound, but also to the weapon; after all, if magnetic forces could affect planetary orbits, might not vital spirits readily traverse the short distance between weapon and wound?”

The same arguments for why you should read this book hold for why you should read Shakespeare. Because you need a rest from thinking bad thoughts about the ultimate legacy that human beings will leave the planet. Because understanding how the Copernican worldview picked us up and put us down in a different place throws some useful light on how we have “received” evolution, the last time we were reminded that our specialness is only relative.

I remember someone from my university days exclaiming that it was remarkable what WS could write, considering he didn’t have the benefit of modern psychology.  She got it backwards of course. We can’t know what Shakespeare thought, but we think we know what kings among others think, because Shakespeare convinced us of it.

The Science of Shakespeare: A New Look at the Playwright’s Universe, by Dan Falk, published by Goose Lane in Canada and Thomas Dunne Books, St. Martin’s Press in the U.S.