Buffleheads are her favourite ducks. 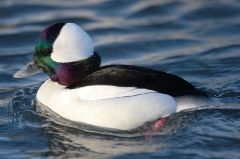 Buffleheads are shy ducks who pass through Georgian Bay on their way north in the spring. The males have striking black heads with large white patches that look like giant ear phones. The females are a more subdued grey/brown with what looks like a white smudge of flour across their cheeks as if they’ve been making bread. They nest in holes bored by Northern Flickers, another of Penny’s favourites.