My mother got by with a little hand cream and a stub of lipstick. My under-the-sink-cupboard on the other hand is filled with bygone elixirs, some of which —body washes and exfoliates, toothpastes, deodorants and hand cleaners—are responsible for washing tiny microplastics, less than 5mm in diameter, down the drain and right through our waste management systems. The U.S. Environmental Protection Agency has identified 2,000 products containing tiny polyethylene and polypropylene pellets with soft abrasive properties, little scrubbers that make our skin glow and whiten our teeth, but cause internal blockages, dehydration and death in the fish and birds that eat them.

Microplastics can also alter the heat retention and light reflection properties of our beaches. Worst of all, pollutants such as DDT, PAHs and PCBs glom on to them, building to super high concentrations as they work their way up the food chain. 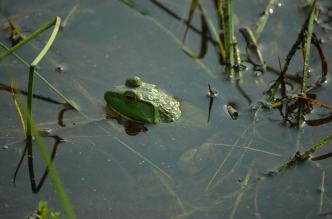 New York’s Attorney General estimates that his state flushes 19 tons of microbeads down the drain every year. California shreds 38 tons. Researchers have found on average eight pieces per small fish in Lake Erie, 20 pieces per medium fish and 44 per cormorant.

(Something else to worry about: sunscreens contain nanoparticles, in particular titanium dioxide, (TiO2), that filter out ultraviolet rays but usually come coated with silica or alumina. When these substances hit the water, the coating dissolves allowing sunlight and oxygen to transform TiO2 into hydrogen peroxide or H2O2. H2O2 can inhibit the growth of phytoplankton—it’s an antiseptic after all. This is the finding first published in Environmental Science & Technology, and recently picked up by Scientific American. David Sánchez-Quiles of the Mediterranean Institute for Advanced Studies lead the study.)

According to a recent scientific paper, the first to take a serious look at microbeads in the Great Lakes, by Dr. Sherri Mason, professor of chemistry at SUNY Fredonia, the lakes are awash in this stuff. Concentrations range from an insignificant 450 beads per square kilometer to over 466,000 near urban areas such as Cleveland, Erie and Buffalo. Lake Erie accounts for 90% of all the plastic debris found in the Great Lakes, with two samples of the 21 taken accounting for 85% of the total.

As well as addressing the industry directly, the Cities Initiative is asking some pointed questions of the U.S. Environmental Protection Agency: what if anything is it doing about it; what research is it conducting into the impact on human and ecosystem health, and what steps is it doing to clean it the mess.

The beauty industry is fighting back. According to the 5 Gyres Institute, dedicated to a planet free of plastic pollution and sponsors of the Great Lakes study, Illinois passed an almost useless microbead bill thanks to the efforts of beauty industry lobbyists. They ensured that “biodegradable” plastics escaped regulation. But these so-called biodegradable plastics  aren’t in fact biodegradable except under very particular conditions such as industrial composts, certainly not in water bodies. Using similarly twisted language, the law is meant to apply to solid plastics that “retain their defined shape,” again, a misrepresentation of how plastic actually behaves. It gets smaller in the wild, becoming more digestible and dangerous while still retaining its molecular structure.

In the final indignity, the law exempts “over the counter drugs” from censure, “drugs” such as whitening toothpastes, aromatherapy, acne scrubs, wrinkle-reducing products, dandruff shampoo and moisturizing cleansers. And the bill concludes by leaving most of the levers in the hands of the industry.

More bad news: California just saw its proposed microbead bill go down to defeat by one vote. But New York, Michigan, and Ohio are moving ahead with legislation and Wisconsin is studying the issue. Let’s see what happens.

Canada isn’t on board yet
Canada hasn’t got a file on this. Leona Aglukkaq, Environment Canada minister identified the Great Lakes Water Quality Agreement as the appropriate vehicle for regulating this substance. But she added that “this is a plastic waste management/disposal issue” and therefore the purview of the provinces. This is a cop- out. Still on the federal front, NDP member Brian Masse, is working on a private member’s bill to address this subject.

Ontario Ministry of the Environment and Climate Change is studying plastics in the Great Lakes despite the federal government being responsible for their regulation. Results are expected this winter according to Peter Helm, a senior research scientist with the Ontario government.

If only there was a way to stop wild and crazy ideas like polishing our skin with microbeads from taking hold. Instead we reduced to mopping up the consequences, redrafting international treaties, relying on near hopeless private members’ bills, and pleading with cosmetic companies to change their ingredients. We’re struggling to reclaim ground we shouldn’t have lost in the first place.

The personal care business is not at risk here. Despite the fact that their products are completely unnecessary, we’re not likely to get over our quasi-addiction to them. And given the infinitely inventive capacities of this sector, I expect they could keep their lotions and potions within some well-thought-out environmentally friendly parameters and still make plenty of money. In the meantime, they could also choose not to follow in the footsteps of the tobacco industry.

Dr. Sherri A Mason: Bio and paper on microbeads http://www.fredonia.edu/chemistry/faculty/mason.asp