Since we started worrying about climate change and the pileup of carbon dioxide in the atmosphere, scientists have turned their attention to how exactly plants breathe in the stuff. As a result, studies and reports are raining down upon us. The studies are not necessarily contradictory as difficult to place in their relative importance. We haven’t got a good grip on how these innumerable findings fit together because behind every one, there’s a “yes, but…”

This risks confusion but better to learn up on these findings as they unfold so we have something to fight back with, should someone claim that what’s good for the tar sands is good for trees. So here are a few intriguing ideas that have turned up lately.

Plants absorb carbon dioxide differently depending on the season, drawing in their breath in the spring and summer when they are growing and exhaling slowly over the course of the fall and winter. As a result there is more CO2 in the atmosphere during the  winter than in the summer.

The last 50 years have seen this trend grow more pronounced. Heather Graven, a post-doctoral researcher at the Scripps Institution of Oceanography, has been graphing these seasonal variations, and it looks like the jagged edge of a saw. As CO2 has increased (from 315 parts per million to 400 parts per million over five decades) plants have been gobbling up more of the stuff. The net effect: more and bigger plants, fueled by longer growing seasons, more CO2, and a warming planet.

Yes, but this new carbon-fueled growth may be finite. Another study, this one published in the Proceedings of the National Academy of Sciences, asserts that there are limits to how much carbon dioxide a plant or plants can absorb. “Global warming of four degrees Celsius will result in the earth’s land vegetation becoming dominated by negative effects, such as ‘moisture stress’, caused by plant cells getting too little water.” This means that despite the anticipated growth in plants, both in their number and size, the environment won’t be able to support them particularly well.

From Wikipedia: “Moisture stress occurs when the water in a plant’s cells is reduced to less than normal levels. This can occur because of a lack of water in the plant’s root zone, higher rates of transpiration than the rate of moisture uptake by the roots. Moisture stress is more strongly related to water potential than it is to water content.” (Wikipedia has good definitions for these as well.)

Yes, but if this new extra carbon-dioxide-fueled growth has its limits, what do you make of the finding that big mature trees continue to grow i.e. pack on carbon dioxide into old age and are in fact better consumers than adolescent trees?

Nathan Stephenson, an ecologist at the U.S. Geological Survey in Three River California says, “The trees that are adding the most mass are the biggest ones, and that holds pretty much everywhere on earth that we looked.”

This finding, as reported in Nature challenges the long held theory that growth plateaus as trees mature. But Stephenson and his colleagues found, after studying data related to 673,046 trees and 403 species, that “the largest trees gained the most mass each year in 97% of the species, capitalizing on their additional leaves and adding more girth high in the sky.” Old trees may have tired, less efficient leaves than younger trees but because they have more of them, they net out ahead of the kids.

Yes, but all this growth may not be good for us after all at least in the Arctic. Increases in vegetation are evident and measurable from outer space, especially in the Boreal forests and on the Arctic tundra. Shrubs trap snow that would otherwise blow away, providing an insulating blanket for the tundra that as a result is experiencing a greater rate of decomposition and the subsequent release of carbon dioxide. The Boreal forest, one third of which has a floor of permafrost, is now under threat of warming with gigantic consequences for how much CO2 will end up in the atmosphere. 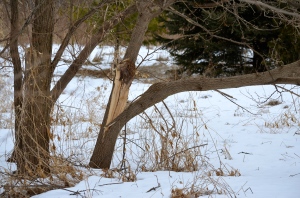 In another respect, these invading, northward-bound shrubs are bad because they detract from the reflectivity of the snowy plains. Two Dartmouth scientists claim that snowy treeless, shrub-less fields offer greater climate change benefits than an equivalent stand of trees; snow reflects solar energy back into space, the albedo reflectivity effect, whereas dark leafy substances absorb it.

“In some cases, the cooling influence of albedo can equal and surpass the climatic benefits of carbon sequestration from forest growth,” says postdoctoral fellow David A. Lutz and professor of environmental studies and Richard B. Howarth in a paper presented to the American Geophysical Union. They suggest that countries such as Canada with large expanses of snowy barren areas should be given a climate credit for these areas in international negotiations around global warming.

Let’s start a conversation about this. I would love to hear from people who know more than I do.

Plants Could Stop Being the Brake on Global Warming: http://www.independent.co.uk/environment/climate-change/plants-could-stop-being-brake-on-global-warming-9009067.html

13 thoughts on “Plants and Climate Change: The Story is Getting Very Complicated”